Cookies help us deliver our services. By using our services, you agree to our use of cookies. More information

From Commandos Wiki
Jump to navigationJump to search 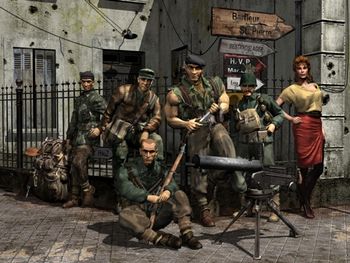 Commandos is a stealth-oriented real-time tactics game series, available for Microsoft Windows and Mac OS X. The game is set in the Second World War. It leans heavily (though not always accurately) on historical events during WWII to carry the plot. The series was developed by the Spanish company Pyro Studios and published by Eidos Interactive.

The main commandos in the series are:

The Pilot's name is Gregor McRae. He appears in Commandos: Behind Enemy Lines in Mission 10. McRae was a pilot that crashed in Africa and he was captured by the Germans. The Commandos saved McRae at the end and McRae was never shown again.

The informer who was on Mission 12, was caught in a sweep in Commandos: Behind Enemy Lines. He was saved by the Commandos, and then he was caught again in Mission 17, and was scheduled for execution along with the members of the French Resistance. And was finally saved again. He was never seen again.

The Yugoslav Officer who was to be executed on Mission 2 in Commandos: Beyond the Call of Duty. He was saved as well before the execution could begin. He was never seen again after the mission.

An SS Officer, who was to unmask the conspirators that planned to assassinate Hitler. He was captured by the Commandos on Mission 5 in Commandos: Beyond the Call of Duty.

A General of the German Army that had the plans for the next offensive of The Battle of the Bulge, in Mission 8 of Commandos: Beyond the Call of Duty. The Dutch Contact met up with him and stole the documents from him. He escaped as the Commandos completed their task.

An SS General, that was on Mission 15 in Commandos: Behind Enemy Lines. He had a list of the members of the German Resistance, and was planning on taking the list to Berlin. He was eliminated by the Commandos, before he had a chance to escape.

Was a German Air Force pilot that was in Mission 6 of Commandos: Beyond the Call of Duty. He was captured in order to fly the Heinkel He-162 jet-powered aircraft. That was to be used as an escape plane for the Commandos after they had completed their mission.

Were 4 sappers in charge of blowing up the Liege bridge in case there was anything suspicious happening. Appeared in Mission 16 on Commandos: Behind Enemy Lines. They were all eliminated by the Commandos before they had a chance to destroy the bridge.

Was a POW in Stalag 13 in Mission 7 on Commandos: Beyond the Call of Duty. He escaped with the rest of the prisoners as the Commandos completed their task. This character's name is probably a nod to Steve McQueen's character in the film "The Great Escape."

Was a POW in Stalag 13. He was British, and a Royal Air Force pilot based on his accent and blue jacket. He appeared on Mission 7 in Commandos: Beyond the Call of Duty. He was killed by the Commandos before he had a chance to tell the German guards of the plot to escape.

There are five games in the series, which are listed here in the order they were released:

Commandos: Behind Enemy Lines (CBEL) was released on July 1, 1998. It was published by Eidos Interactive, and developed by Pyro Studios. It features 20 missions. The view is isometric with tactical gameplay. Several of the missions are reminiscent of novels or Hollywood movies, for example:

A Sega Mega Drive/Genesis version of Commandos: Behind Enemy Lines, with the first 5 missions, was also made by Russian homebrew programmers.

Commandos: Beyond the Call of Duty[edit]

Main article: Commandos: Beyond the Call of Duty

Commandos: Beyond the Call of Duty, a set of new Commandos missions issued as a standalone game, was released on March 31, 1999. Despite it being much shorter than Behind Enemy Lines, it is much more difficult game containing levels on a far greater scale to the extent of being comparable to those that were to be seen in Commandos 2. It has 8 missions, with locations including Yugoslavia and Crete.

File:Commandos2.jpg
The interface for Commandos 2: Men of Courage. The commandos are displayed in the top left, the game commands and map are in the top right and the actions that can be performed by the selected commando are in the bottom right. This screenshot shows the "Target: Burma" mission, which involves the commandos rescuing a spiritual leader and a battalion of Ghurkas.

A full sequel, released in 2001, was rebuilt with a 3D engine, more interactive environments, more skills for the commandos, and new characters. Like its predecessor, it drew heavily from war films, as shown in titles of levels such as "Bridge Over the River Kwai" and "Saving Private Ryan". The game received even greater praise than its predecessor, and sold well in the United States and Europe. Improvements to playable characters in the game included the ability to move bodies, handle explosives, and allowing all characters to drive vehicles (paving the way for the Driver's expulsion from the series in the next instalment).

Several new characters were added to the series in this sequel: A thief called Paul "Lupin" Toledo, a dog called Whiskey and Wilson, a shipwrecked sailor claiming to be from the Light Brigade.

This is the third sequel in the series and was released in October, 2003. In this game the mouse wheel can be used to rotate the player's vantage point. It was the first in the series to use a true 3D engine. However, the game has been criticized for its short missions and lack of hotkeys.

Released during the first months of 2006, this game makes a departure from the first three games. Although the missions are set-up in a similar fashion (several different objectives, some to be achieved through stealth, others through use of force) and in most occasions the player is allowed to change between different characters, this is the first game in the series to apply a first-person perspective, like many other World War II inspired games, in contrast to the overhead view of the earlier games. Hence, the game is far more similar to the Medal of Honor or Call of Duty games than to earlier entries of the series.

The game attracted an overwhelmingly negative reaction, especially from those coming from fans of the earlier games in the series who see this a massive departure mainly due to the trademark difficulty instead giving way to a game that is much less so. Similarly, it was promoted as mixing elements of strategy from the past games with traditional first-person shooter gameplay but instead only hinted them and whilst being predominantly action orientated. As a result, both critics and fans felt it did little to distance itself from the recent flood of similar games.